Part one of this post addressed using an off-the-shelf solution to provide a tactile mixing board for Final Cut Pro 7. Here, I’ll walk you through using two apps, slightly less off the shelf, to control the audio in Avid Media Composer.

UPDATE/NOTE: At the end of this article I speculate about using the Liine Lemur app instead of the tools discussed here. I have worked that out, and written it up here. This article remains the most detailed regarding setting everything up, though.

Now, Avid being Avid, the situation on Media Composer hasn’t been so easy. It was kind of driving me crazy as I spent much of the past year cutting on Avid again after a long time doing FCP job after FCP job. Every few weeks I’d troll the internet again looking for a way to do this; I’d re-read the Avid manuals and stare at all the menu options again and again to see what I’d missed. Media Composer 5.5 supports a few control surfaces – the Command | 8 , Euphonix Artist series, another Digidesign surface, and the ProMix 01 – but I’d failed to get my AC-7 app to connect successfully.

Then, a few months ago, I stumbled on a message board thread, which lead me to another editor, located in London.

Mark Burton had gotten his hands on some of the Avid approved hardware interfaces, and recorded the signals they sent communicating back and forth with Media Composer. This gave me the idea to try and use some of the more general purpose iPad MIDI apps to emulate some simpler hardware. After a few days of emailing each other our baby steps forward, I’d managed to get a system working for faders, emulating a mixing board I’d previously owned, the Yamaha ProMix 01. Mark had built settings emulating a JL Cooper device, and eventually I ended up using that as well.

This isn’t quite as elegant as the FCP solution, for several reasons, but the bottom line is we have flying faders working for Media Composer. Right now, it takes two iPad apps, rather than just one, and the interaction between the control surface and Media Composer is less “real time” than FCP. More on that later. Now, I’m going to walk you through setting up the emulation.

Please note – while this is a long description, in practice it’s about 30 seconds work each morning to connect the iPad and get it working.

At the moment, you’ll need to buy two apps to make this work. MIDI Touch and TOUCH OSC. At a later date, we may be able to get by with just Touch OSC, but as of February 2012, you need both. MIDI Touch is just used to connect to Media Composer; TouchOSC is used to actually act as the control surface.

Once you’ve got both of those apps on your iPad, you’ll also need to put the templates I’ve created onto the apps. For MIDI Touch download the file from here:

And email it to yourself. Open your email on the iPad, and then select the attachment, and open it into MIDI Touch.

Getting templates into Touch OSC is a little more complicated. Download the companion desktop app – the links are about halfway down the page:

My template file for the control surface is here:

Open the TouchOSC Editor app, and load the JLC template. To connect with the iPad app, press the “SYNC” button onscreen, then open TouchOSC on the iPad, and tap any layout in the list. You’ll be taken to a screen titled “Layout”. Tap the first thing on the screen – the “ADD” button. You should see your desktop computer listed here. Tap its name, and you should see the template file download to the iPad.

OK…now you’ve got the iPad set up.

Connecting the iPad to the Mac

On your iPad, open MIDI Touch. On your Mac, open the Applications folder. Find the Utilities folder, and open Audio MIDI Setup. If you don’t see a MIDI window, use the WINDOW menu to show it. Double click on the NETWORK icon. You should see your iPad in the Directory listing. Select it and then press the “Connect” button. Your iPad’s name should appear in the Participants window. 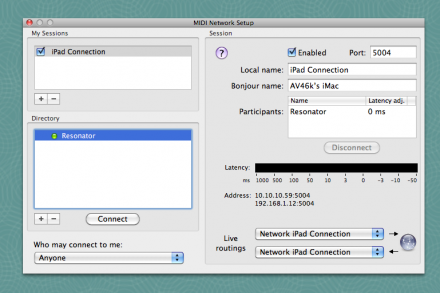 Now your iPad is connected wirelessly to your Mac.

Telling Composer to listen for a control surface

When you launch Composer, you can click into your preferences, and tell it to expect a hardware interface. You’re looking for CONTROLLER SETTINGS.

For Gain Controller Port, select whatever your session was named in the Audio Midi Setup utility. 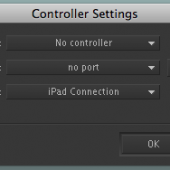 Open the Media Composer console window. You’ll use this to verify that Composer has connected correctly with the interface.

Open “MIDI Touch” on your iPad. Select the “Connect as JLC” template you loaded up earlier. It’s got one button on screen. You know what to do.

Once you’ve pressed that big red button, you should see “Identified automation gain controller as a JLCooper MCS series” appear in the Avid Console window.

Once Composer acknowledges that it’s speaking with an interface, exit from MIDI Touch and launch Touch OSC. Select the “JLC” layout. Almost there!

Toggle Composer from Record to Source and back to Record. You should see the faders jump to match the positions on screen. If you’ve got more than 8 tracks in your sequence, set your Avid’s mix window to 8 tracks, not 16. Now click that “Group 1” button. It will change to Group 2. The faders on the iPad change to reflect the position of faders 9-16. Click group again, and faders toggle back to tracks 1-8. (There is a “bank” button on my basic iPad layout – see the end of this post for explanation of how to set that up. It needs additional software to work.)

Now, Media Composer doesn’t respond as smoothly to changes during playback as FCP does. This is evidenced by the arrival of a third mixer mode in addition to Clip Gain and Automation Gain. Live mode does what you expect, but in practice I leave Composer in Clip Gain mode as that’s what the (person) Mixer I’m working with now prefers to receive in his OMFS.

The solos and mutes are a little tricky; sometimes Composer seems to forget it’s got the interface there and the first button press just reminds Composer to listen – you’ll need to tap it again to get the desired result. If the mutes and solos get out of sync between the screen and iPad, try hitting play on Media Composer. Usually the iPad will come into line. If it doesn’t, just use the mouse and turn things back the way you need them to be the old fashioned way.

Have fun mixing with your hands rather than a mouse.

Incidentally, I’ve been unable to make a template with MIDI Touch that consistently chases the on screen faders. I can’t tell why – I’ve got a first generation iPad 3G running the latest OS. Anyway, it may work later with an updated version, but for now, I just use MIDI Touch to send the initial MIDI SysEx message identifying the virtual mixing board and then switch to Touch OSC since it works and is being actively developed still. It looks as though I’ll be able to make an all-in-one solution with the Lemur app, but it’s expensive and not clear to me as yet that for this purpose it’s $50 dollars better.

It turns out that the macro program Keyboard Maestro can trigger a macro based on receiving MIDI information. I’ve built out my control surface to include a few more functions now: 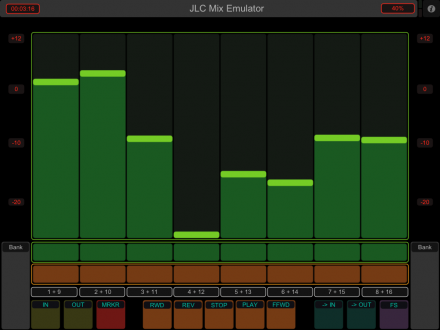 The bank buttons on either side of the screen trigger a macro which clicks where the Media Composer “Grp 1” button sits on my screen. I leave the mixer window in the upper right of the screen and never move it, so I was able to make that macro work. Eventually I added transport controls, mark in and out, go to in and out, add a marker, and toggle fullscreen.

You can use the following macro library to do the same thing, though you will need to modify it depending on how your Avid keyboard is set up.

You can download all the individual files referenced in this post as a single zip file here: