I just spent three days last week at the offices of PBS NewsHour Weekend. It’s been a little while since I actually worked directly for a PBS property, and it was great to spend a little time in such a professional environment. The shop is cutting on Premiere, which I did not expect, but I always have fun when I work in Premiere. I can’t quite put my finger on it, but there’s something about the app that is very manipulatable to me even after working on Avid for nearly 20 years. It was great to get to take a fully tricked out Premiere edit system for a spin. 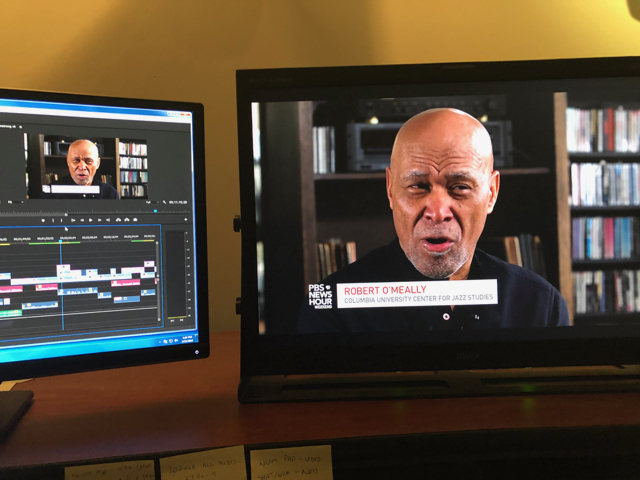 You can see all the notes I made as I try to relearn all my secret shortcut keys for yet another editing system.

The piece I was hired to cut was a short segment about everyone’s favorite jazz musician, Louis Armstrong. The Queens, NY home where he lived for years has been a museum for quite some time now, and reporter/producer Megan Thompson spoke with the new director of the Louis Armstrong House Museum. I’d visited the museum years ago, and it’s a blast – the kitchen is amazing, and Louis’ study, with dual reel-to-reel machines installed, is a trip as well. We got to show a little bit of the house to folks that might be more than a subway ride away.

The story also highlighted some audio clips from those reel-to-reels, which you wouldn’t get to hear if you visited the house in person, but which are now being digitized and put online. Louis taped everything – records he listened to, himself practicing, and the conversations he had in the room. Some of them are pretty funny, and we got some surprisingly spicy language onto the air for PBS.

You can see the whole piece here along with a formatted transcript:

It’s really a bit of a valentine, and I was glad to be able to help out with it. Ten more minutes of Louis Armstrong in your day is always good, right?